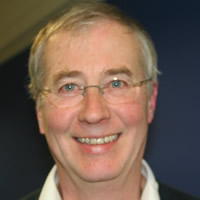 Michael Brand (b. 1952, London, England) is an English composer, arranger, conductor and publisher.

Mr. Brand was educated at Haberdashers' Aske's School, Elstree, from where he won an open scholarship to read music at University College of Oxford. Whilst at Oxford he wrote the music for, and conducted, many theatrical productions and concerts including working at the Edinburgh Festival Fringe.

In 1979 he joined BBC Radio as a producer working on big band shows, Jazz Club and a nightly arts programme. He left the BBC in 1982 to run publishers G & M Brand Publications Ltd., and concentrate on his writing and his published output, much of it for wind and brass, is considerable, both as a composer and arranger.

His Dreams and Fancies -- a substantial work for Dutch fanfare band -- was premiered at the World Music Congress in Kerkrade, Holland, in 1997. His cantata for choir and concert band - Pioneer 10 - received performances at Warwick Arts Centre and Symphony Hall, Birmingham.