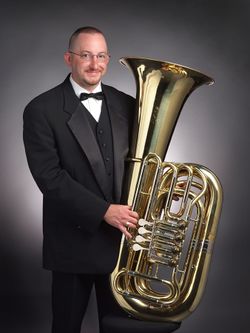 Mr. Blostein has been working actively as a professional musician through composition, arranging, conducting, education, performance, and working as a copyist since 1996. His compositions have been performed in many area venues, including local schools, various colleges, community performances, and solo artists. He is an active educator in the Averill Park School District, maintains a private low brass studio, and is an active tuba and bass trombone player.

Currently, he is an active performer with the Georgie Wonders Orchestra, Brass-O-Mania, Capital Brass and the Dominant Five Brass Quintet, as well as an active freelance performer.

Mr. Blostein has taught and/or performed in Arizona, Vermont, Massachusetts, and throughout New York State. He has been a music instructor at Averill Park (N.Y.) High School since 2000. He also taught tuba techniques at the University of Arizona 1997-1998.