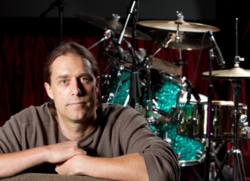 Michael Aukofer (b. 1974, Wichita, Ks.) is an American percussionist and composer.

Aukofer's music career began in high school teaching local drummers, percussion ensembles and performing on the drumset in nightclubs. From 1992-1997 Michael attended Friends University in Wichita, KS. and graduated with a Bachelors Degree in Music Education (choral and instrumental).

In succession with his undergraduate work, Michael composed several works for percussion as well as a ballet with choreographer Melonie Buchanan. Prior to Michael’s graduation in 1997, he was awarded the annual Kansas Cultural Trust, which facilitated study with composer William Kraft in Los Angeles, Ca.

Already involved in a few studio recording projects, in 1997 Michael traveled to Nashville to play drums/percussion on a CD by the group Alathea. Their project encountered some difficulty getting off the ground, and Michael ended up producing the CD as well as playing the drums on it. “One thing led to another and Nashville ended up being called “home” for the next year and a half”. While in Nashville, Michael continued to produce, perform, and compose ... including projects by Ryan Long (3), Eric Hauck (3), Rufus Tree (2), Tom Frye (2), as well as two more LP's with Althea. One other set of recording projects Michael had the privilege to be a part of were instrumental recordings with Phil Keaggy.

By the spring of 1998, Michael and Eric Hauck joined Mitch McVicker, and after adopting the name Kid Brothers, started some light touring in support of Mitch’s first album. Other projects Michael initiated include a one-week intensive percussion workshop held at Friends University titled “Rhythm on the Plains”. Michael founded, taught and composed for this camp high school aged camp from 1996-2007.

In 2001 Michael made the decision to go back to school. Dr. J.C. Combs, the head of percussion studies at Wichita State University at that time, offered Michael an opportunity to attend WSU for his Masters Degree in Percussion Performance. Michael completed the master’s degree in just three semesters and with the encouragement of Dr. Combs, accepted a Teaching Assistantship at the University of Kentucky in Lexington to work on his Doctorate of Musical Arts.

While at The University of Kentucky, Michael's original compositions began gaining international recognition. Between 2003 and 2009, Michael published over 30 original works. One of Michael's on-going projects is composing 14 musical works, each inspired by one of the 14 Stations of the Cross, a traditional Christian prayer and meditation that focuses on the final day of Jesus’ life.

Since June 2004, Michael has been the Director of Music at West Ridge Community Church in Elgin, IL.