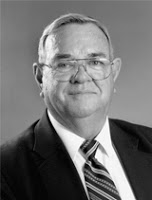 Melvin L. Shelton (b. 15 July 1932, Wichita, Kan. – 1 June 2012, Decatur, Ill.) was an American composer and educator. Dr. Shelton received music degrees from Wichita State University and the University of Idaho. Many years later, he was awarded an honorary Doctor of Musical Arts degree from the VanderCook College of Music. He has served as a band and orchestra director in all levels of public school music for over 36 years. He currently is professor emeritus of music at Boise State University, where he was director of bands and taught conducting, arranging, and music education for 24 years.

Shelton was formerly principal trumpeter of the Boise (Idaho) Philharmonic Orchestra and the Philharmonic Brass Quintet. He has served in state and regional offices of the Music Educators National Conference, the College Band Directors National Association, and the National Band Association. He is also active as a guest conductor, clinician, and adjudicator.