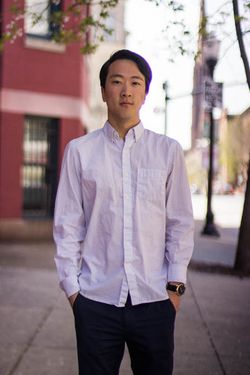 Born as Jihoon Lee in South Korea, Mr. Pellegrino was raised on Long Island, New York. He received a BA in music composition and oboe performance from Fredonia State University of New York in 2016, an MM in music composition from the Peabody Conservatory, and is currently (2019) a DMA candidate in music composition from Peabody. His primary teachers have been Oscar Bettison, Dr. Rob Deemer, Dr. Sean Doyle, and Dr. Karl Boelter. Equally active as a teacher, Matt is a faculty associate at Peabody Conservatory for the Music Theory department, as well as an instructor of oboe, flute, and saxophone at the Park School of Baltimore.

With a fascination for new timbral realms of expression, aural extremes, and visceral sonic imagery, Mr. Pellegrino has enjoyed an eclectic musical upbringing; one which combines classical training, electronic sounds, and a brief stint in a metal band. Pellegrino seeks to create music that is, all at once, deeply personal, raw, and darkly humorous.

Matthew has written music for large ensembles, chamber groups, and choirs, as well as scores for film and other media. In 2016, Matthew's Winter Unending, Invincible Summer won the Charles B. Olson award, and has been performed and recorded by the Encore Wind Ensemble. His piece what if... for pierrot ensemble was recently recorded by the Virtuosi Players of the Brno Filharmonie in the Czech Republic with ABLAZE records. Additionally, he has collaborated with the dance program, film studio, and animation department at the State University of New York at Fredonia. His works have been performed by the Fredonia State University Wind Ensemble, Kent State University New Music Ensemble, and MezzoBlasto Clarinet Quartet.