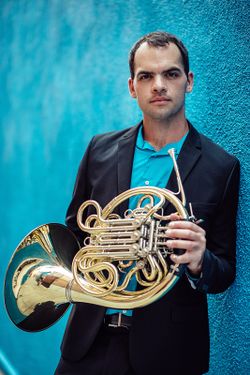 Matthew Mauro (b. 1989, Whitehouse, Ohio) is an American composer, hornist and conductor.

Dr. Mauro graduated from Anthony Wayne High School in Whitehouse, Ohio in 2007. Although having no formal training in composition, Mauro has learned music theory and compositional techniques through his musical studies. Mauro was an undergraduate music education and French horn performance major at The Ohio State University. There he has performed with the Wind Symphony, the Marching Band, and Symphony Orchestra. He completed his master's and his Doctor of Musical Arts degree from the University of Cincinnati College-Conservatory of Music (CCM) in 2020. He also studied classical piano for 12 years.

Matt also has an interest in music composition, and has had works for wind ensemble, horn choir, and piano published. One of his works for wind ensemble, Freeing Aurora, was premiered in Carnegie Hall. Matt has recently combined his passion for composition with horn pedagogy in order to write an etude book designed to facilitate the preparation of orchestral excerpts (to be published in 2020).

In addition to performing, Matt also maintains an active teaching schedule. He has a studio of both private horn and piano students, and has taught as an adjunct music faculty member at Northern Kentucky University. Matt earned a cognate in Music Theory and was a graduate teaching assistant in Music Theory while pursuing his doctorate degree from CCM. In addition to performing and teaching, Matt is also the music and choir director at the Lutheran Church of the Resurrection in Anderson, Ohio, where he plays the piano for and accompanies worship services.