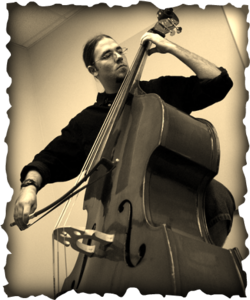 Matthew Donnelly (b. October 1986, Canada) is a Canadian composer and performer.

Starting his life in a small mining town, he soon relocated to the booming metropolis of North Bay, Ont., where he spent the next 18 years of his life. Matt’s upbringing was not a particularly musical one. Before music entered his life, he spent a lot of his time playing outside with his two younger sisters and his neighbourhood friends. When Matt entered grade seven, he was placed in a mandatory instrumental music class. He asked about the saxophone. When he reached high school, Mr. Donnelly was able to experiment with string instruments. The year before, he had seen a concert at St. Joseph Scollard Hall, his soon-to-be high school, and had taken particular notice of a wooden behemoth being played on the left-hand side of the stage. The only thought that crossed his mind was “I want to play that,” and so he did. When Matt entered his high school string music class, he made a beeline for the double bass. This was the instrument that would carry him through the rest of his high school and university careers.

Deciding not to follow in the footsteps of his family and work for Ontario Northland, Matthew enrolled at Wilfrid Laurier University in Waterloo, Ont. where he studied music. Matt chose to pursue a major in composition while still performing and taking lessons. In 2010 Matthew received his B.Mus. in contemporary music: composition. Matt is looking at pursuing a masters degree in music performance while still keeping up with his compositions.

Since finishing school, Matt has continued to play with a variety of different groups in the Kitchener-Waterloo area. While his primary instrument is still double bass, it is not uncommon to see him on stage wielding a saxophone, mandolin, clarinet, flute or any other instrument you can think of (except harp).