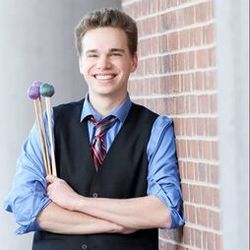 Matt has performed internationally and has also as performed in numerous pit orchestras. He competed in the Great Plains International Marimba Competition where he was complimented on his tone and musicality. He was selected as the featured music graduate at the Peck School of the Arts graduation convocation where he performed Joseph Schwantner's Velocities in May of 2017.

As an educator, Matt served as the percussion coach for the Youth Wind Ensemble at UWM, percussion coach for numerous honors band events in Wisconsin and Minnesota, music counselor at the French Woods Festival of the Performing Arts, worked the MMEA All-State Band Clinic and taught the percussion methods course at the U of M. Matt’s ongoing endeavor of giving clinics to students, which highlights the importance and benefits of music, has been met with high praise and enthusiasm.

As a composer, Matt has written for chamber groups, percussion, concert band, and orchestra. His percussion quintet Hypnotic Crystals was selected as a winner and performed at the 2017 Wisconsin Alliance for Composers (WAC) New Music Festival and had its international premiere on September 28, 2017, in Costa Rica. Matt arranges video game music for the marimba, most notably Dragon Roost Island from The Legend of Zelda: The Wind Waker, which received over 48,000 views on Facebook. He has an EP of original Electro Pop Rock Marimba music titled Marimbtronics.