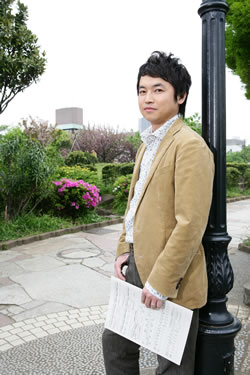 Masanori Kato (b. 1972) is a Japanese composer and pianist.

Kato graduated from Tokyo University of the Arts in 1995 with a first-class honors degree and then finished the master’s degree in 1998. He has written many works such as opera, orchestral works, chamber music works, songs and chorus for various musicians that have been highly praised abroad. He released the first piano solo album titled SoloO in 2001 and the music books of that CD also came out. Five Sonnets for a female chorus, and Ashita No Uta, a suite for chorus, words by Masumitsu Miyamoto and his other pieces also have been published in Japan. Mr Kato composed Slovakian Rhapsody for Alto Saxophone and Orchestra commissioned by Nobuya Sugawa in 2005. I

His works is filled with beautiful and fresh lyricism, keeping a distance from contemporary music and having been broadcast many times by NHK-FM radio. His producing ability and lecture skill have been highly praised, as well, so that he deserves to be called a multi artist. He has appeared in many concerts as a pianist playing with many famous musicians.