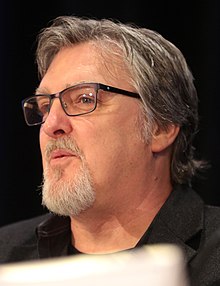 Martin O'Donnell (b. 1 May 1955, West Chester, Penn.) is an American composer known for his work on video game developer.

O'Donnell describes his upbringing as "typical"; he received piano lessons and wanted to start a rock band when he reached junior high school. His father made films while his mother taught piano. Despite his interest in progressive and fusion rock, O'Donnell studied the classical component of music and composition at Wheaton College Conservatory of Music and received his Master's of Music degree in composition with honors from the University of Southern California in the early 1980s.

After getting his degree, O'Donnell moved to Chicago, where he expected that he would teach at the American Conservatory of Music. The job fell through, and instead he worked as a grip in the film and television business. O'Donnell began his musical career in the field after one of his colleagues who knew of his music background approached him to write for his film. O'Donnell talked to his friend Michael Salvatori, who had his own recording studio, and offered to split the profits from the job with him; the two became constant partners.

After completing a film score and a few commercials, the two decided to quit their day jobs and produce music in Chicago; they founded a production company, TotalAudio. O'Donnell began his career in music writing television and radio jingles such as the Flintstones Vitamins jingle and scoring for radio stations and films. O'Donnell moved to composing video game music when TotalAudio did the sound design for the 1997 title Riven. After producing the music for Myth II, Bungie contracted O'Donnell to work on their other projects, including Oni and the project that would become Halo: Combat Evolved.

O'Donnell's score to the Halo trilogy has received critical acclaim, earning him several awards, and the commercial soundtrack release of the music to Halo 2 was the best-selling video game soundtrack of all time in the United States. He went on to compose the scores for Halo 3 (2007), Halo 3: ODST (2009), and Halo: Reach (2010). His final work for Bungie was composing music for the 2014 video game Destiny that went unused. Subsequently, he co-founded Highwire Games and composed the score for their debut virtual reality game Golem, which was released in late 2019.