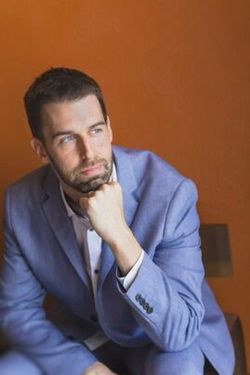 Martin Blessinger (b. 1978) is an American composer and educator.

Blessinger's works have been performed around the country and abroad by distinguished soloists, collegiate ensembles, professional groups, and community organizations, as well as on conferences and festivals at the national and international level. His orchestration of Jessica Grace Wing's score for the critically-acclaimed off-Broadway musical Lost won Best Music in the 2003 New York City Fringe Festival and received a revival performance by the Arizona Onstage Theater Company. Further, he has won awards from the Diana Barnhart American Song Competition (cum laude, for Cradle Song), the Eppes String Quartet Competition (for Postcard from the Americas), the Illinois Wesleyan University Young Composers Competition (for Fanfare for Brass Quintet), the NACUSA Young Composers Competition (for Duo for Saxophone and Piano), and ASCAP.

In 2014, Blessinger served as guest composer for the Talis Festival & Academy in Saas-Fee, Switzerland, and has since been a featured composer on the Cliburn Foundation concert series (Fort Worth), the Basically Beethoven concert series (Dallas), and with the Texas New Music Ensemble (Houston). Further, he was an invited composer at the 2018 Beijing Modern Music Festival/International Society for Contemporary Music World New Music Days Festival in Beijing, China and has been named the 2020 Texas Music Teachers Association Commissioned Composer.

Martin Blessinger is currently [2021] a professor of music theory and composition at Texas Christian University. Prior to arriving at TCU, he worked as a lecturer in music theory at the Ithaca College School of Music.