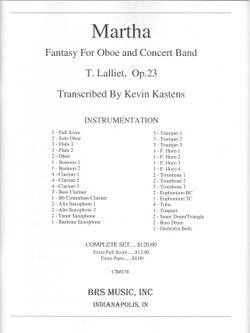 This work bears the designation Opus 23 and the subtitle Fantasy for Oboe and Concert Band.

Martha, Op. 23 is drawn from the themes of the opera of the same name by Friedrich von Flotow (1812-1883), which was written and premiered in 1847. The Fantasy, as a set of variations on operatic melodies, allows the oboist to prove its ability to give life to melodic phrases while dazzling with two-voiced textures, double tonguing, and circular breathing.