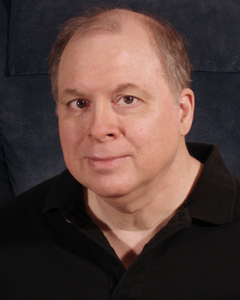 Mark E. Wolfram (b. 20 March 1955, Hibbing, Minn.) is an American composer, arranger, music producer, and music publisher. He began his music education with piano and violin, but switched to trombone at age 10. Mark studied in Minnesota with Earl Benson from 7th grade through high school, at which time he also studied conducting with Vaclav Nelhybel and Alfred Reed, as well as composition and arranging with Frank Bencriscutto at the University of Minnesota before attending Northwestern University, where he received a Bachelor of Music degree and studied with John P. Paynter and Frank Crisafulli. Mark continued his studies at UCLA and USC with courses in composition, orchestration, electronic synthesis, and film scoring. Mark's principal composition teachers were Oscar-winning composer Leonard Rosenman and Dr. Mark Carlson. He was selected to participate in the prestigious Fred Karlin/ASCAP Film Scoring Workshop.

Wolfram has composed for industrial films, thousands of jingles and underscores for television and radio advertising, and the concert stage. Mark's Interludes for Percussion and Trumpet is performed internationally and his Brass Trio, which took Grand Prize in the 1989 International Horn Society Competition, is frequently performed on four continents. His instrumental works continue to be played at Disneyland and Walt Disney World, as well as by the Medalist Concert Band, the Chicago Bears Band and numerous college, high school and community organizations.