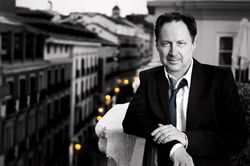 Mark Isham was exposed to all types of music through his parents who were musicians themselves. The young Isham began studies in piano and violin, but it was the trumpet that captured his imagination. While at one of his mother’s concert rehearsals, Isham was struck by the members of the trumpet section. Isham explained, “They sat in the back and played loud. And they seemed like the coolest guys in the whole place!” The trumpet became his signature instrument.

The Ishams moved from New York to San Francisco, and by the age of 15 Mark was playing his horn in jazz clubs, simultaneously performing with The Oakland and San Francisco Symphonies. Word of Isham’s talent continued to spread as he played in different bands, ultimately forming his own band Group 87.

Already an established performer and recording artist, he began to experiment with electronic music and incorporated it into several of his albums, earning a reputation as a live and electronic instrumentalist. In 1983 Isham received critical acclaim as a solo artist with the release of his debut album Vapor Drawings, which led to Isham being hired to compose the music for Disney’s critically acclaimed Never Cry Wolf.

Mark Isham began to traverse the musical landscape of performing musician and film composer and continues to do so today. His distinctive trumpet voice remains in demand. HMark Isham has received worldwide critical acclaim including a Grammy for his Virgin Records release Mark Isham. He has received Grammy nominations for his albums Castalia and Tibet as well as for the film scores of A River Runs Through It and Men of Honor.

Though renowned for his work in the electronic and New Age genres, Mark Isham is perhaps most recognized for his contributions to the world of jazz. Isham has collaborated and performed with jazz legends including Horace Silver, Chick Corea, Herbie Hancock and Bobby McFerrin.

As a prolific film composer, Mark Isham continues to demonstrate his diverse musical voice with over one hundred film scores. His recent credits include the Jackie Robinson biopic 42.