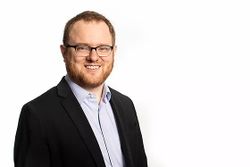 Mark Buller (b. 1986, Maryland) is an American composer and educator.

Mr. Buller began his musical studies at a young age, studying percussion at the Peabody Preparatory with Baltimore Symphony Orchestra percussionist Leo LePage. He went on to study piano with respected pedagogue Jan Puckett. Mark earned a bachelor’s degree in piano performance at Bob Jones University, where he studied with David Lehman. He went on to earn a graduate degree in composition from BJU, studying with Dan Forrest. In the summer of 2010 he participated in the highSCORE Festival in Pavia, Italy, where he studied with Christopher Theofanidis and Giovanni Albini and had lessons with Paul Moravec and Mario Garuti. Mark received his DMA in composition at the University of Houston Moores School of Music, where he studied with Rob Smith.

Mark, who has also had lessons with Joan Pinkston and Grammy award-winning composer Richard Danielpour, is a recipient of several awards, including the 2010 Vanguard Premieres Choral Composition Contest (Emerging Composers Category) and three ASCAPlus Awards. He has twice been a finalist in the ASCAP Morton Gould Young Composer Awards. He is also a composer in the Da Camera of Houston Young Artist Program.

In addition to teaching at Lone Star College and San Jacinto College, he is the director of education and community engagement for AFA.