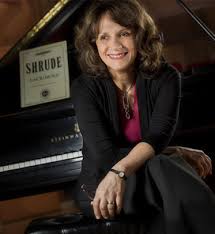 Dr. Shrude studied at Alverno College (Bachelor of Music, 1969) and Northwestern University (Master of Music, 1971; Doctor of Music, 1984). She began teaching music part-time at Bowling Green State University in 1977 and was appointed to a full-time position there in 1984. She currently directs the MidAmerican Center for Contemporary Music and co-directs the annual New Music and Art Festival. She was appointed chair of the theory and composition department at Interlochen Arts Camp in 1991.

Shrude’s music has been widely performed and recorded. She has written music for orchestra, chamber ensembles, and wind groups. Among her many honors are the Kennedy Center Friedheim Award for Orchestral Music (1984), the Faricy Award for Creative Music (1977), the Phi Kappa Phi Creative Achievement Award (1985), the Alverno College Alumna of the Year Award (1988), and the 1989 Woman of Achievement Award from the Toledo Chapter of Women in Communications. She was awarded composer fellowships from the Ohio Arts Council in 1985 and 1990 and from the National Endowment for the Arts in 1993.