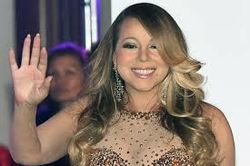 Mary's father, Alfred Roy, was of African American and Venezuelan (including Afro-Venezuelan) descent, while her mother, Patricia (Hickey), is of white Irish descent. Carey's name was derived from the song They Call the Wind Maria, originally from the 1951 Broadway musical Paint Your Wagon. When Carey was three, her parents divorced. While in high school, Carey began writing songs with Gavin Christopher. She began to work her way into the recording industry in 1988 when she fortuitously handing a homemade demo tape to Tony Mottola, head of Columbia Records, at a party. He liked what he heard and began to guide Carey’s career.

Carey has said that from childhood she has been influenced by Billie Holiday, Sarah Vaughan, and R&B and soul musicians such as Gladys Knight and Aretha Franklin. Her music contains strong influences of gospel music, and she credits The Clark Sisters, Shirley Caesar and Edwin Hawkins as the most influential in her early years. Love is the subject of the majority of Carey's lyrics, although she has written about themes such as racism, social alienation, death, world hunger, and spirituality.

Throughout Carey's career, she has collected many honors and awards, including the World Music Awards' Best Selling Female Artist of the Millennium, the Grammy's Best New Artist in 1991, and Billboard's Special Achievement Award for the Artist of the Decade during the 1990s. In a career spanning over 20 years, Carey has sold over 200 million records worldwide, making her one of the biggest-selling artists in music history.