March of the Women, The (flex) 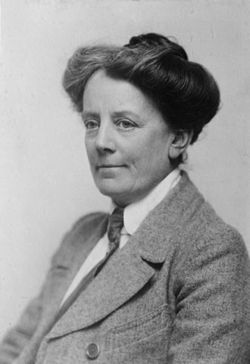 The March of the Women was a song composed by Ethel Smyth in 1910, to words by Cicely Hamilton. It became the official anthem of the Women's Social and Political Union (WSPU) and more widely the anthem of the women's suffrage movement throughout the United Kingdom and elsewhere. Activists sang it not only at rallies but also in prison while they were on hunger strike. Smyth produced a number of different arrangements of the work.

Smyth was arrested, along with the other women, in 1910 and was sentenced to two months in prison. Witnesses tell of suffragettes marching in the prison quadrangle singing The March of the Women as Smyth leaned out a window to conduct them with a toothbrush.

While Smyth produced a number of arrangements for the song including one for military band, we were not able to locate an original score. Thanks to the internet, we found a program given by the East Grinstead Concert Band over in the UK that featured Smyth’s march. Stuart Fifield, musical director of the band, explained that he had created the arrangement for a concert commemorating England’s suffragette movement. He sent us the score and parts and we are happy to premiere his arrangement in the United States.