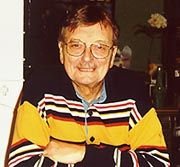 Peeters' first musical activity occurred when he became a clarinet player in the amateur wind band De Werker. In 1945 he became a pupil at The Royal Conservatory of Music in Antwerp, and two years later he graduated with a First Prize in the class of Jos Van Rickstal. In the meantime he had studied privately with Karel De Schrijver. He spent his military service in the welfare section of the army, providing entertainment for the soldiers. He conducted the welfare orchestra in many shows for the Belgian troops in Germany, and it was here that he discovered the big band and light music repertoire. After his national service he played with different big bands and toured through Europe and North Africa.

In 1958 Peeters was recruited by the Swiss radio orchestra, Beromunster Unterhaltungs Orchester. This gave him the opportunity to experiment with his own ideas and theories and he thus became an experienced composer and arranger. In 1962 he was asked to join the famous Hazy Osterwald Sextett as arranger. He produced television shows, film and recordings and worked with great stars such as Catherina Valente, Peter Alexander, Sacha Distel and Henry Salvador. After working for one year with the renowned dance orchestra of Max Greger in Münich, Peeters was invited to make arrangements for recordings of the London Symphony Orchestra with singer Placido Domingo. In 1982 he joined Dolf van der Linden and the famous Dutch radio orchestra Metropool Orkestwriting.

Peeters is also known to have written under the pseudonym "Peter Laine."