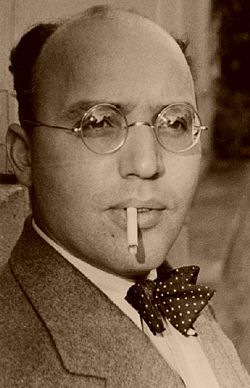 Old Mackie's back in town! One of the most recorded (and recognized) songs of all time now appears in a swingin' version. Beginning with a 'big band swing' chorus, followed by a soft 'Basie-style' chorus, and ending with a full throttle 'shout' chorus, this arrangement will have you grabbing the fire extinguisher.

Mack the Knife or The Ballad of Mack the Knife (German: Die Moritat von Mackie Messer) is a song composed by Kurt Weill with lyrics by Bertolt Brecht for their 1928 music drama The Threepenny Opera. The song has become a popular standard recorded by many artists, including a U.S. and UK number one hit for Bobby Darin in 1959.

A "moritat" is a medieval version of the murder ballad performed by strolling minstrels. In The Threepenny Opera, the Moritat singer with his street organ introduces and closes the drama with the tale of the deadly Mackie Messer, or Mack the Knife, a character based on the dashing highwayman Macheath in John Gay's The Beggar's Opera (who was in turn based on the historical thief Jack Sheppard). The Brecht-Weill version of the character was far more cruel and sinister, and has been transformed into a modern antihero. The play opens with the Moritat singer comparing Macheath (unfavorably) with a shark and then telling tales of his crimes: arson, robbery, rape, murder.