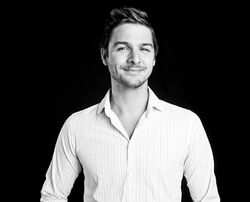 Maarten De Splenter (1984, Belgium) is a Belgian saxophonist and composer, active in both classical and light music.

De Splenter studied classical saxophone at the conservatories of Brussels and Ghent and then obtained a second master's degree in composition jazz and light music at the Conservatory of Tilburg. For his thesis he investigated compositional systems in the musical Wicked, for which he had the opportunity to meet the Oscar and Grammy Award-winner Stephen Schwartz in New York.

He composes for various genres ranging from orchestral and chamber music over folk and pop rock to musical theater and musical for which he frequently collaborates in the Netherlands with Tony Award nominated writer, director and translator Koen van Dijk. His compositions are performed in Belgium and abroad.

As a saxophonist at a young age, Maarten won several awards at soloist competitions including the prestigious Axion Classics award in 2002. As a performer he has been active as a saxophonist, pianist and singer in various orchestras, pop rock and folk bands.

After 13 years of teaching saxophone and chamber music at the academy of Boom, De Splenter now teaches composition (classical and jazz), songwriting, music theory and electronic music at the academy of Borgerhout. At the Royal Conservatory of Antwerp he teaches practical harmony & improvisation to strings, wind players, guitarists, composers, accordionists and harpists. There he is also a practice supervisor for the master's theses (Art Educational Projects) in the Educational Master and supports Bob Selderslaghs in their coordination.

In 2020 Maarten De Splenter, together with Natalie Gordon (dance) and Ellen Dierckx (drama), conducted a one-year (preliminary) research at the same institute within the research group CORPoREAL. His specific artistic and pedagogical research interests lie in cross-genre creation methods within music education.