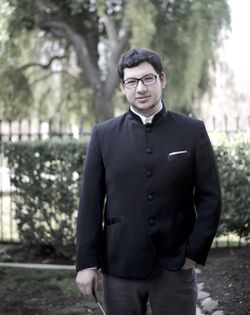 Martín Alexander Arellano (b. 1997, Calif.) is an American conductor and composer.

Alex has written compositions for a variety of ensembles including wind ensembles, Orchestras, and various chamber ensembles. He has worked with various composers including Brett Abigaña, Andrew Sigler, Brad Hart, and Steven Bryant. He completed his bachelor's in music theory and composition at the University of Miami's Frost School of Music with Lansing McLoskey, Dorothy Hindman, and Charles Norman Mason, and is currently studying with Miguel Etchegoncelay and Theodor Guschlbauer at the Strasbourg Conservatoire in France.

As a conductor, Alex has studied with a wide range of conductors including Stuart Sims at California State University at Stanislaus, Robert Carnochan at the University of Miami, Emily Threinen from the University of Minnesota, and Neil Thompson from the Orquestra Filarmonica de Goias in Brazil. He is the founding conductor and current director of the Central California Youth Wind Ensemble based in Turlock, which was formed in 2015. Alex is also a current conducting fellow with the Miami Symphony Orchestra under Maestro Eduardo Marturet.

Arellano is the current director of its jazz big band and the organizer and principal conductor of the Frost Greek Wind Ensemble, which includes members of Miami's Phi Mu Alpha, Sigma Alpha Iota, and Tau Beta Sigma chapters.