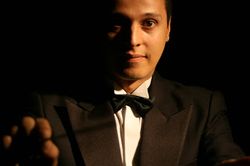 Pérez Valero holds two master’s degrees, one in Hispanic and Latin American Music from Madrid’s Complutense University (2012) and another in music from the Simón Bolívar University (2009), and a bachelor’s degree in music with a specialization in composition from the University of Musical Studies (2005).

He was selected as composer in residence by Mexico’s National Fund for Culture and Art and the National Cultural Council. While in that country he composed the oratorio, Cantares del Antiguo México. He was selected by the French Association of Artistic Action to write Concert de Toulouse for amplified guitar and orchestra in the Cité Internationale des Arts (Paris).

Pérez Valero has directed choirs and orchestra, such as the Philharmonic Orchestra of Carabobo, always as an advocate of contemporary music. Currently he works as a professor, composer and researcher at the University of the Arts in Guayaquil, Ecuador.