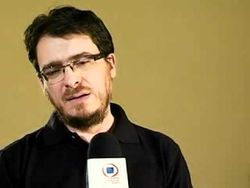 Nani developed from an early age an interest in music and was at first a self-taught musician and then student of guitar with several professors of his native city, Villa Maria, Argentina. In that period he composed his first pieces for guitar. Between 1987 and 1991 he moved to the city of Córdoba where he enrolled in Musical Composition at U.N.C. under teachers Caesar Franchisena, Vicente Moncho and Oscar Bazan. Between 1991 and 1993, he took classes from composition with Oscar Bazan, and composition and orchestration with Vicente Moncho.

Since 1999, Nani has served as professor of Instrumentation and Orchestration at the National University of Villa Maria, becoming Chair in 2005. Nani is founder and director of the Project Instrumental Ensemble at UNVM. In 2000, he founded the Wind Ensemble at UNVM and in 2008 created the String Orchestra UNVM.

Nani’s works have been played throughout the United States, Latin America, Europe and Singapore to critical acclaim. Susan Fields writing in the Journal of the World Association of Symphonic Bands and Ensembles wrote “ . . . [Nani’s] works were emphasized by their deep aesthetic, conceptual and orchestral styles, and I consider them to represent the contemporary musical language of Latin America…”