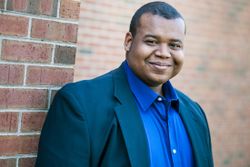 The title of this work is intentionally written in lower case: love words.

love words is inspired by the poem “Romance” by Harlem Renaissance poet Claude McKay. While many of his poems deal with typical poetic topics like love, McKay was anything but typical. A Jamaican immigrant who lived most of his life in the U.S., an activist involved in the socialist and communist movements, an atheist who later converted to Catholicism, and a bisexual, McKay’s life bucks the traditional narrative of Black male identity in the 20th century.

In poems like “Romance,” love is viewed through a complicated lens, one that ignores obvious distinctions like gender, and embraces the messiness of sexual desire and impermanence. love words is an expansion of my previously-composed setting of this poem, which served as the opening of my work Love Words | Mad Words, a cycle of McKay’s poetry for countertenor and chamber ensemble.

love words was commissioned by the Pride Bands Alliance (formerly the Lesbian and Gay Bands Association) for their 2022 conference in my hometown of Chicago, Ill., celebrating the fortieth anniversary of their formation in the city. McKay’s work is therefore fitting, as he spent his final years in Chicago.