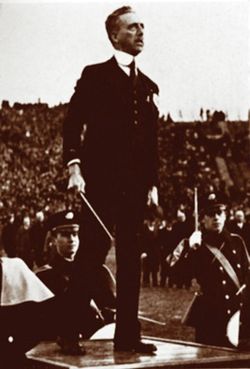 Louis was one of six brothers and two sisters in the family of Lorenz and Johanna Elbel. All were musical, and a family orchestra was formed which also included five brothers of Lorenz. Lorenz founded the Elbel Brothers Music Store in South Bend in 1870, and Louis later managed it. Louis Elbel attended the University of Michigan from 1896 to 1899. He was a member of the track team and tied the world record for the indoor 40-yard dash. In the fall of 1899, he went to Leipzig, Germany, to study with Martin Krause, and returned in the summer of 1901. In addition to his work at the family music store, Elbel was active as a concert pianist, presenting recitals and piano-lecture recitals. He performed with the Theodore Thomas Orchestra in 1907.

In addition to his The Victors march, Elbel composed several piano pieces, songs, and works for small orchestra.

Elbel died in Ann Arbor, Michigan, on May 2, 1959. The University of Michigan Band founded the Elbel Club in his honor, and donors contribute money to support band operations.