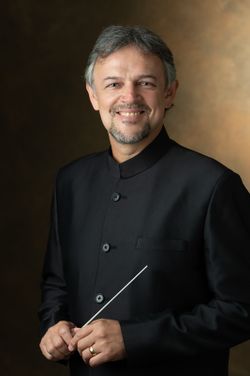 In his composition Los Caminos de Lengerke (The Roads of Lengerke), written in 2010 through a grant awarded by the provincial government of Santander (Colombia), Ruben Darío Gómez, under the pretext of relating historical events, makes a foray into new idioms and sound effects that had not been present in his previous works. As a result, in a formal perspective he achieves an ambitious and complex score, revealing less known facets of his musical inventiveness. The work is based on the life of Geo – actually, Georg Ernst – von Lengerke (1827-1882), a German engineer and businessman who arrived to Santander during the mid-nineteenth century, settling there to engage in the exploitation and trade of cinchona bark; he came to own large stretches of land, developing a network of bridges and roads that served to his commercial activity. Although he amassed a considerable fortune, Lengerke's last years were marked by economical collapse due to a drop in prices of cinchona bark and his abuse of liquor. This character, which inspired the novel La Otra Raya del Tigre (The Other Tiger Stripe), by Pedro Gómez Valderrama, died at his home in the town of Zapatoca (Santander), which is also the homeland to the composer Ruben Darío Gómez.

As the composer annotates, it is a work "dedicated to recreating and showing the course" of this character. And he adds, "it contains elements that connect his origin, the impact of his participation in the region, different roads that were built, tragic aspects and particularities of the historical context of the epoch..."

Los Caminos de Lengerke (The Pathways of Lengerke) is a piece that makes reference to a network of pathways located in Gómez Prada’s home region, in the department of Santander. The name comes from Geo Von Lengerke (1827-1882), a German businessman and traveler who settled in the region in 1852 and promoted the trade of tobacco, coffee, and quinine. Lengerke also propelled the reparation of old pathways and bridges and the construction of new ones, cutting down across the mountain range to find the fertile Magdalena Valley and reach the river ports open to multiple trade connections. The piece suggests imaginary long-lasting journeys of peasants and merchants throughout the pathways, and insinuates a metaphorical parallel between those legendary journeys and traveling along time during the course of life.