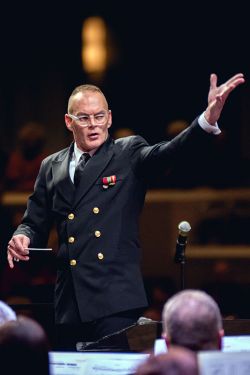 Schissel studied brass instruments and conducting with Carlton Stewart, Frederick Fennell, and John Paynter. In the years following his studies at the University of Northern Iowa, he has distinguished himself as a prominent conductor, orchestrator, and musicologist.

Deeply committed to young musicians, he has appeared as conductor of all-state music festivals and of festival bands and orchestras in more than 30 states. As a composer and orchestrator, Schissel has created an extensive catalogue of over 500 works for orchestra, symphonic wind band, and jazz ensemble. His musical score for Bill Moyers: America’s First River, The Hudson that first appeared on PBS in April 2002, received extensive critical acclaim. He also created musical scores for two films for the Franklin D. Roosevelt Home in Hyde Park, New York. As a recording artist, Schissel has amassed a large discography with a wide variety of ensembles and various musical genres.

Schissel is a senior musicologist at the Library of Congress and a leading authority on the music of Percy Aldridge Grainger, Aaron Copland, Leonard Bernstein, and former Boston Symphony Orchestra conductor Serge Koussevitzky. He co-authored The Complete Literary and Musical Works of John Philip Sousa and is currently co-authoring The Musical Works of Karl L. King with Gene Milford of the University of Akron. Schissel appeared in the award-winning PBS documentary If You Knew Sousa for the American Experience series, as well as Ben Wattenberg’s Think Tank. He serves as a commentator on the Voice of America and for the United States Information Service. In recognition of his world travels, he was inducted into the Circumnavigators Club of New York, in May 2002, and in 2005 he was elected to membership in the prestigious American Bandmasters Association. He is also an honorary conductor of the historic Ringgold Band ─ the last band conducted by John Philip Sousa.

In 2013, at the request of the George and Ira Gershwin family, Loras John Schissel began work at the University of Michigan School of Music as a board member of the "Gershwin Editions" creating new authoritative editions of George Gershwin's concert music. Mr. Schissel is the music director and conductor of both the Virginia Grand Military Band, of which he is the founder, and the Cleveland Orchestra’s Blossom Festival Band, two of the finest concert bands in the world. He has travelled throughout the United States, Europe, and Asia conducting orchestras, bands, and choral ensembles in a broad range of musical styles and varied programs.