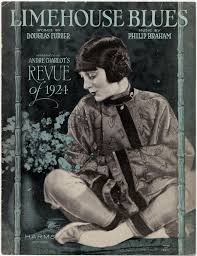 Limehouse Blues is a popular British song written by the London-based duo of Douglas Furber (lyrics) and Philip Braham (music).

Evoking the Limehouse district, which pre-World War II was considered the Chinatown of London – with Chinese references heard in both the lyrics and the melody – the song premiered in the 1921 West End revue A to Z being sung by Teddie Gerard in a wordless melodramatic number featuring Gerard as a hostess in a Limehouse dance-hall fronting a brothel. Gertrude Lawrence's Broadway performance of the Limehouse Blues number proved to be a "showstopper", making her a Broadway star.