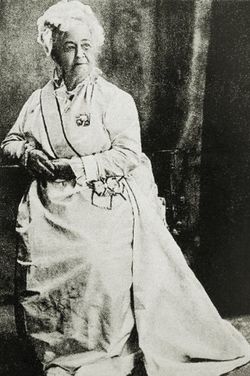 Born in 1850 to a family of Ottoman aristocrats of Cretan Turkish origins, she was the daughter of İsmail Hakkı Pasha, (often called Hekim İsmail Pasha (İsmail Pasha the Doctor). She spent her childhood in the Dolmabahçe Palace as a member of the Imperial Harem. At the age of seven, she began taking piano lessons from an Italian pianist. After 1876, she studied Turkish music with Medini Aziz Efendiu. She also took private lessons in French, and later in ancient Greek and theology, while her father was the Ottoman governor of Crete.

She married Giritli Sırrı Pasha, a high-ranking Ottoman administrator of Cretan origin, who later became prime minister, and a poet in his own right. In line with her husband's appointments, she traveled across Anatolia and the Balkans. She settled in Istanbul after the death of her husband in 1895, and maintained close relations with the Ottoman palace.

From 1895 onward, she dedicated herself to poetry and music, in both the Turkish and European schools. She took piano lessons and hosted people of art and science in her mansion. She composed roughly 200 vocal and instrumental works, including a volume of over fifty songs, the texts of which were written by contemporary romantic poets. Her songs are strong in technique, emotional and closely faithful to the traditions of Ottoman classical music.

Apart from being a composer in the tradition of Turkish classical music, she is also, through her memoirs written towards the end of her life, one of the primary first-hand sources available to historians on the Ottoman harem, in the late-19th century context of that institution. Leyla Hanım also wrote prose and published her memoirs, entitled The Imperial Harem of the Sultans: Memoirs of Leyla (Saz) Hanimefendi, which explained in plain details the inner life and stories of the Ottoman palace, which have been translated into English, among other languages. The original memoirs, along with many of her other works, were lost in a fire at her residence and were recreated.

She adopted the surname "Saz" (a family of Turkish musical instruments) in the frame of the 1934 Law on Family Names in Turkey.