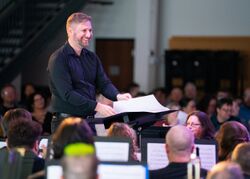 Lee Hartman (b. 1979, Springfield, Mass.) is an American composer, conductor, educator, and advocate.

Dr. Hartman holds degrees from the University of Missouri-Kansas City (UMKC) (DMA, MM) and the University of Delaware (BM). At UD, he received a Dean’s Scholar position enabling him to pursue an individually designed academic program combining music education and composition. He studied music composition with James Mobberley, Paul Rudy, Chen Yi, Zhou Long, and Jennifer Margaret Barker. He served for three years as the assistant director to Musica Nova at UMKC, the conservatory's new music ensemble. He previously taught full time at the University of Central Missouri and was the recipient of a 2016–17 Excellence in Teaching Award from the College of Arts, Humanities, and Social Sciences.

Dr. Hartman is currently [2021] the director of programming for the Harriman-Jewell Series. He is the artistic director of the Mid America Freedom Band and performs with NorthWinds Symphonic Band. In 2018 he served as artistic director for the Gay Games X in Paris, France and, with MAFB, hosted the Annual Conference of the Lesbian and Gay Band Association in Kansas City.