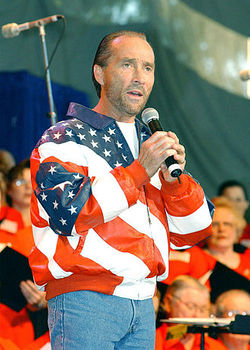 Lee Greenwood (b. 27 October 1942, Los Angeles) is an American singer/songwriter. He and grew up on a farm near Sacramento, California and began playing saxophone at age 7. By the time he was 14, he could play nearly all the instruments in the school orchestra. He became a working musician at a young age, and skipped his high school graduation because he had a show to play at the Golden Hotel and Casino in Reno, Nevada.

Greenwood is universally known for his mega-hit God Bless the USA. This song was adopted as part of the country’s healing process after the September 11th terrorist attacks.