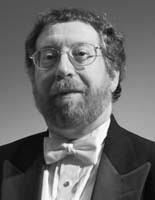 A former violinist with the Albany (N.Y.) Symphony Orchestra, Actor has advanced degrees in both engineering, from Rensselaer Polytechnic Institute, and music composition, from San Jose State University. He has studied composition with Donald Sur, Brent Heisinger, Charles Jones, and Andrew Imbrie, and conducting with Angelo Frascarelli, David Epstein and Higo Harada.

Actor’s orchestral music is characterized by its dramatic impact and emotional expressivity, featuring a striking use of harmony, counterpoint, motivic development, and lyricism with a fresh, modern flavor. These attributes are most prominent in the large-scale dramatic structures of Actor’s two symphonies.

Actor has won a number of awards for his compositions, most recently for Concerto for Horn and Orchestra, which was the first prize winner in the 2007 International Horn Society Composition Contest. Variations and Fugue for Orchestra was a finalist in both the Columbia Orchestra's 2007 American Composer Competition and the Holyoke Civic Symphony's 2005 Composition Competition, and Prelude to a Tragedy was selected as a finalist in the Columbia Orchestra's 2005 American Composer Competition.

Actor was named composer-in-residence of the Palo Alto Philharmonic in 2002, following his appointment as assistant conductor in 2001, and in 2008 was named assistant conductor of the Nova Vista Symphony. He is a member of the American Composers Forum, the American Music Center, and ASCAP®, who recently named Actor the recipient of an ASCAPlus award for the sixth consecutive year. He has received awards and grants from ASCAP, the American Music Center, and the International Horn Society.