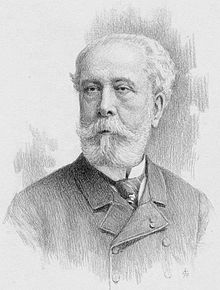 This overture to Lalo's opera Le Roy d'Ys, originally written for orchestra, has proved to be one of the finest overtures in the concert repertoire. It is an intensely dramatic work, and for this reason, lends itself admirably to a band transcription. It depicts many moods, including love, such as in the original cello solo, assigned to the solo alto saxophone in the present transcription.

The plot of Édouard Lalo’s opera Le Roi d’Ys is based on an old Breton legend. The two daughters of the King of Ys are in love with Mylio, but he returns the love of only one of them, Rozenn. Overwhelmed by jealousy, the second sister, Margared, contrives to have Ys flooded by the opening of the sea gates on the wedding night of Mylio and Rozenn. Then, overcome with guilt, she commits suicide. The patron saint of Ys saves the city from destruction. The overture to the opera contains some of the opera's principal melodic ideas.

Le roi d'Ys (The King of Ys) is an opera in three acts and five tableaux by the French composer Édouard Lalo, to a libretto by Édouard Blau, based on the old Breton legend of the drowned city of Ys. That city was, according to the legend, the capital of the kingdom of Cornouaille.

This is Lalo's most complex and ambitious creation. (This same legend inspired Claude Debussy's La Cathédrale Engloutie.) Le Roi d'Ys was not initially considered performable and was not staged until 1888, when Lalo was 65 years old. The opera was premiered on 7 May 1888 by the Opéra Comique at the Théâtre Lyrique on the Place du Châtelet in Paris. Apart from the overture, the most famous piece in the opera is the tenor's aubade in act 3, Vainement, ma bien-aimée (In vain, my beloved).