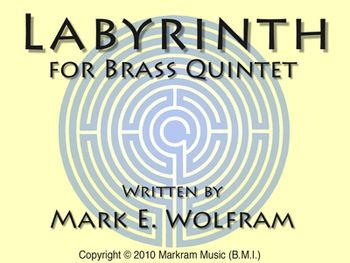 Labyrinth (for Brass Quintet) was inspired by both the fact and lore associated with mazes and puzzles of all kinds. Labyrinths have existed since prehistoric times. Some labyrinths are "unicursal", meaning that they have a single path leading to a center, often embodying a journey - both a physical journey of walking the path - and a lifelong spiritual journey: a hard path to God, with the entrance being birth and the center being God. Complex labyrinths are known as "multicursal" - with choices of path and direction - they are branching puzzles which use misdirection and several dead ends on the way to the center.

A meander (or meandrous) is a decorative border constructed from a continuous line, shaped into a repeated motif. The word "meander" used as a verb recalls a twisting and turning path. It has been said that a meander is the figure of a labyrinth in linear form.

Prehistoric labyrinths are believed to have served as traps for malevolent spirits - or as defined paths for early man's ritual dances.

One of the most famous examples of a labyrinth is from Greek mythology, where King Minos of Crete commissioned the legendary artificer Daedalus to build a labyrinth at Knossos to hold the Minotaur (a mythical creature who was half man and half bull), who was eventually killed by Theseus. Daedalus made the labyrinth so complex that he himself could barely escape it after he built it. Theseus (the slayer of the Minotar) was aided by Ariadne, who provided him with a skein of thread, (called a "clew") so he could find his way out again. That "clew" evolved into our modern-day word "clue" - meaning a hint to help solve a puzzle.

The first movement, "The Journey Begins," opens with strong contrary motion ensemble figures based on fourth-fifth structure chords and whole-tone scales. Following the several measures of expository material the French horn presents the first theme - a short line with unusual contours which is answered by the Trombone at the fifth. The jaunty rhythmic under-pinnings from two muted Trumpets and the Tuba keep the piece moving forward. The opening figures are restated, followed by harmonically tight staccato phrases with rapid dynamic shifts, and then some of the fourth-fifth structure material is reprised. A final restatement of the opening ensemble figure completes the movement.

The slower second movement, "Meandering Paths," starts with French Horn eighth-note figures establishing a harmonic and rhythmic foundation. The Tuba introduces the melody, followed by a Trumpet line with open and muted timbre shifts. As the melodic figure and accompaniment shift from instrument to instrument around the ensemble, the movement builds to a dramatic climax, quickly subsiding and returning to the opening motifs with a slightly fuller scoring. The movement ends with a restatement of the melody and accompaniment in a warm, reassuring tone.

The third movement, "Ritual Dance," is a bright, full-voiced tour-de-force using the accompaniment figure from Movement 2 as the germ for melodic material. Interwoven throughout the movement are several themes from previous movements in slightly altered forms. Contrasting quartal and bitonal sections set up the coda: a return to the opening melodic figures - a brief moment of introspective material - and then a satisfying, full-voiced brassy finish.

The duration is approximately 8.5 minutes. This quintet is written for a seasoned group with many standout parts for strong individual performers. Either the opening movement or final movement can be used as a stand-alone encore piece, as they're both real audience pleasers!