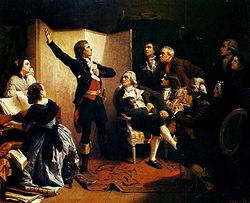 La Marseillaise is the national anthem of France. The song was written in 1792 by Claude Joseph Rouget de Lisle in Strasbourg after the declaration of war by France against Austria, and was originally titled Chant de guerre pour l'Armée du Rhin (War Song for the Rhine Army).

The Marseillaise was a revolutionary song, an anthem to freedom, a patriotic call to mobilize all the citizens and an exhortation to fight against tyranny and foreign invasion. The French National Convention adopted it as the Republic's anthem in 1795. It acquired its nickname after being sung in Paris by volunteers from the city of Marseille marching to the capital. The song is the first example of the "European march" anthemic style. The anthem's evocative melody and lyrics have led to its widespread use as a song of revolution and its incorporation into many pieces of classical and popular music.