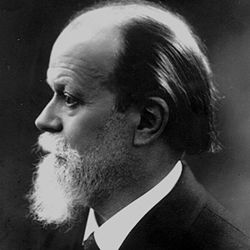 
This work bears the designation Opus 15.

What version of the Pan story was Jules Mouquet using? How concrete can the Pan story be connected to “La Flute de Pan” by Jules Mouquet? Being partly programmatic piece, sonata “La flute de Pan” gives only brief indications which follow one general mythological story of Pan, and the rest has to come from each performer individually so there cannot be any general indications of expressions while performing the piece.

Each of the work's three movements is prefaced with a brief poem in French -- these are the lines that precede the first movement, Pan et les bergers (Pan and the Shepherds):

O Pan, who dwells on the mountain,
Sing us a song from your sweet lips,
Sing to us accompanied by your pastoral reed-pipe.

This arrangement features a colorful yet light accompaniment to this delightful flute solo.

The first movement of this arrangement received its premiere in May 2011 featuring Sarah Harkness (flute) and the Nelsen Middle School Symphonic Band under the direction of Joey Roberts in Renton, Washington. Subsequently, the remaining two movements of the Sonata were arranged in 2013.

In Greek religion and mythology, Pan is the god of the wild, shepherds and flocks, nature of mountain wilds and rustic music, and companion of the nymphs. His name originates within the ancient Greek language, from the word paein, meaning "to pasture"; the modern word "panic" is derived from the name. He has the hindquarters, legs, and horns of a goat, in the same manner as a faun or satyr. With his homeland in rustic Arcadia, he is also recognized as the god of fields, groves, and wooded glens; because of this, Pan is connected to fertility and the season of spring. The ancient Greeks also considered Pan to be the god of theatrical criticism and impromptus. He is often depicted playing the pan flute.