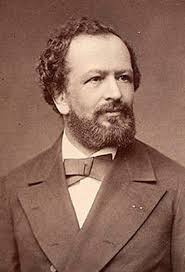 Subtitle: For Four Horns and Orchestra

Carl Heinrich Hübler was hornist in the Dresden Royal Court Orchestra. In October 1849 he was engaged in a private performance in the apartment of Johann Rudolph Lewy in Dresden of Robert Schumann's Konzertstück for four Horns and Orchestra (op. 86) with the composer in attendance. This event inspired Hübler so much that he composed his own Konzertstück for four horns and orchestra in 1856. It's the only piece for which he is mainly remembered.

Hübler’s concert piece, like Schumann’s, is in three contrasting movements, Allegro Maestoso, Andante and Vivace. The horns enter with a three-chord statement that Hübler soon varies with a modulation into minor key. Like Schumann, he gives the horns complex harmonies and revels in the possibility of faster chromatic passages. The slow movement commences with a lyrical theme, modulating into a minor key to provide a little romantic sturm und drang before relaxing back into the lyrical first theme. The final movement allows the horns to return to their joyful hunting horn origins, even calling for hand stopping during a slower passage where the solo first horn is joined by the other three. The first three chords return to conclude the piece.