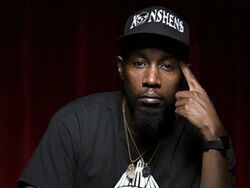 At an early age, Konshens exhibited his musical potential as a vocalist and musician. As a precocious toddler, he was a guest performer with his uncle’s ” 2nd Amendment” and by four, he was attending The Institute for the Gifted and Talented and focusing on the piano and later clarinet.

As a young child, Knoshens began writing poetry and continued to play music wherever there was an audience, usually at church, school, or family gatherings. His creativity developed and his artistic abilities broadened over the years and by the age of 10, he officially fell in love with hip hop. Crediting Big Daddy Kane, Rakim, Ice Cube, Kool G Rap, Guru, Big L, Nas, Tupac and Scarface as some of his early influences, he continued to write and perform. At 15, he became the rapper and backup lead talker for local go-go band High Image. High Image redefined the typical go-go band by creating its own music and original lyrics.

As Konshens (pronounced "conscience") the MC, he recorded his first hip-hop song in 2000 with his longtime friend Antonio Graham. One year later, he met his current producer Phillip Carroll of X Factory Studio/Records. Taking advice given from Rich Harrison, along with the creative minds of Phillip “Producer X” Carroll and Dwayne “Blue” Telesford, Konshens has developed his unique contribution to hip hop.

Konshens has also done something unique in his musical journey by constructing his own band, State of Mind. Konshens likes to refer to Konshens & His State of Mind as “the hip hop version of Frankie Beverly and Maze.”

Konshens recorded his second project with his band in 2009, and a third in 2013, along with being accepted as a voting member of the Recording Academy and joining The Larry Young Morning Show “Hero’s” Segment on Radio One’s WOLB Baltimore. Furthermore, Konshens is a “teaching Artist-in-Residence” at three different schools in Washington, D.C. courtesy of Guerrilla Arts program headed by Gabriel Asheru Benn.

He is currently a governor on the Grammy Chapter Board, Grammy Museum Teaching Artist and U.S. Cultural Ambassador (State Department). He is also the MC of Classically Dope, which merges hip-hop lyrics with original classical arrangements. His introduction to this idea of fusing classical music with hip-hop and rap started with a woodwind quintet at the University of Maryland in 2015, leading him to his EP Classically Dope. But over time, he pushed the needle even further and entertained the involvement of a large ensemble, ranging from 40 to 50 people.

Konshens the MC has recently performed at the John F. Kennedy Center for Performing Arts and has been featured on Fox, ABC and CBS networks, the Washingtonian Magazine and more.