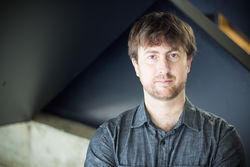 Kit Vaughan Soden (b. 1976, Canada) is a composer, researcher, and music educator.

Mr. Soden is currently pursuing a Doctorate of Music at McGill University, studying with Philippe Leroux and Stephen McAdmas. He is a student member of the Center for Interdisciplinary Research in Music Media and Technology (CIRMMT) and the Music Perception and Cognition Lab (MPCL). His research interests include exploring the relationships between timbre and emotional response, as well as connections between linguistic and musical affects. He works as part of the Orchestration and Perception Project, which investigates how composers implicitly employ auditory grouping processes. The research includes analysis and annotation of musical scores, identifying instances of auditory groupings appearing as orchestral effects. Kit is also collaborating on a large-scale perceptual study investigating the representation of basic emotional categories in dramatic music. This study is working towards a functional theory to describe the interaction of both visual and auditory components in film noir and opera.

As a composer, Kit is inspired by the interaction and relationship between timbre and perceived emotion in music, and particularly in the use of orchestration to enhance the expressive dramaturgy of a composition. His doctoral thesis and research creation project(s) will identify and explore the acoustic phenomena created through the combination of voice and orchestra, highlighting how composers can exploit our innate perceptual mapping of vocal and instrumental timbres to build dramatic and expressive qualities into their music.

Soden was recently chosen as a composer-in-residence for McGill’s Schulich Singers. He has composed works for solo instruments, electronics and live ensemble, various chamber ensembles, and wind ensemble that have been performed in Canada, the U.S., Norway, India, Colombia, and Mexico. He has been commissioned by performers, choreographers, as well as programmers.