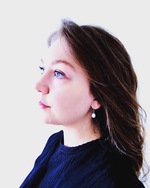 Kirsten Milenko (b. 1993) is an Australian composer based in Copenhagen, Denmark.

Currently, she is studying at the Royal Danish Academy of Music under Niels Rosing-Schow and Simon Løffler. Previously, she studied under Liza Lim, Rosalind Page, Natasha Anderson and Ursula Caporali at the Sydney Conservatorium of Music.

Milenko works with vocal, instrumental and electronic media to express music as environmental phenomena. Working closely with movement, her music embodies a constant synergy between sound and motion to capture perceptions of space.

Her works have been performed in Australia and throughout Europe. She is a recipient of the 2015 Ignaz Friedman Memorial Prize awarded by the Sydney Conservatorium of Music, and the 2018 John Amis Award, Dartington International Summer School. She has also been selected for the Roche Young 2021 Commission by Wolfgang Rihm, Artistic Director of Lucerne Festival.