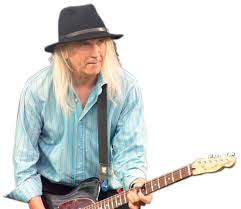 Kimberley Rew (b. 3 December 1951) is an English rock singer-songwriter and guitarist.

Rew's family is from Bristol and moved house several times during his boyhood before he arrived at Jesus College, Cambridge in 1971, and settled in that city. After a brief excursion into archaeology at West Stow Anglo-Saxon Village and gaining a degree in archaeology from Cambridge, Rew formed the Waves with Alex Cooper in 1975, before joining the Soft Boys in 1978, recording the Can of Bees and Underwater Moonlight albums.

He is best known as a member of Katrina and the Waves from 1981 to 1999 and of Robyn Hitchcock's Soft Boys from 1978 to 1981. Two of his better-known compositions, both written for Katrina and the Waves, are Walking on Sunshine and Love Shine a Light, performed by Katrina and the Waves as the United Kingdom's entry at the Eurovision Song Contest 1997, taking the country to its first victory in the contest since 1981.