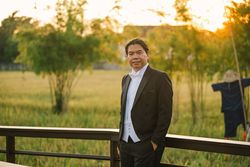 The piece Kheak Choen Joaw Fantasy for concert band was inspired by themes (melodic lines) from the original work entitled Kahek Choen Joaw (แขกเชิญเจ้า) which mean "Inviting the God." The work also borrows a “waiting theme” from general Thai traditional theme. The piece has a typical ABA structure – fast-slow-fast. Both fast sections contain the quotations of the traditional themes. The work was the composer’s interpretation of Thai music in Western outfit-clothing.

The composer adapted the themes from Kheak Choen Joaw to embedded them in his new work by changing the mode from major to minor as well as the rhythmic patterns.

Polyphony -- as we know -- a type of musical texture consisting of two or more simultaneous lines of independent melody -- is common in Western music such as J.S. Bach’s compositions. In Thai music, however, it is in constant mass of heterophony -- a type of texture characterized by the simultaneous variations of a single melodic line using pentatonic scale. The composer is aware of the difference of the two cultures and tried to embed polyphony texture throughout the work. Especially in the slower section, if J.S. Bach were Thai, would his music sound like this? -- using two or more simultaneous lines of independent pentatonic melody.

The composition opens with a very massive and loud chord. It only leaves a single solo line of the B-flat clarinet to lead the ensemble -- similar to the khui Thai (Thai flute) that introduces the ensemble in Thai music. The soloist shows off his/her skills of play the instrument in the cadenza style and end with the intense increasing dynamic of that massive-loud chord that leads us to the “real” opening of the piece.

The piece was commissioned by the Prince’s Royal College Band (PRC Band) to use in an Asian Band Competition in 2008.