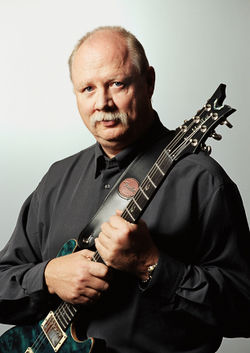 Kerry Allen Livgren (b. 18 September 1949, Topeka. Ks.) is an American musician and songwriter, best known as one of the founding members and primary songwriters for the 1970s progressive rock band, Kansas.

Livgren was drawn to music at a young age; his first musical interests developed with classical and jazz influences. His musical odyssey started with an electric guitar he built using a cheap Stella guitar, a Sears amplifier and a low-quality Astatic microphone. Along with learning guitar, Livgren also focused on learning to write songs due to his desire for more creative expression and originality. He attended Washburn University for some time.

Livgren was a member of numerous bands in the late 1960s and early 1970s and quickly developed a reputation for complex compositions and poetic lyrics that explored spiritual themes. He and Phil Ehart formed the first version of the rock group Kansas in 1970, which fused experimental rock with psychedelia and jazz. As primary songwriter, lead guitarist and keyboard player for Kansas, having penned such hits as Carry On Wayward Son and Dust in the Wind, Livgren propelled the band to worldwide success and critical acclaim, with numerous gold and multi-platinum albums and more than 14 million recordings sold to date. Kansas produced eight gold albums, one platinum album, two quadruple-platinum albums, one platinum live album, and a 1 million-selling gold single, Dust in the Wind, according to the Kansas State Historical Society.

After Kansas, Livgren was part of the group AD, which was followed by a solo career 1989-2000.

Though Livgren is known for his music, he is quick to point out that it is only one of his many pursuits. On his Web site, he quotes his biography: "I'm a family man, I have a role in my church, I'm running a record label, a studio, a production company, a farm, and I have more hobbies and interests than there are hours in the day."