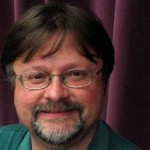 Mr. Davis's musical interests began with playing horn and singing tenor in his school music programs. He continued his studies in composition at the University of Missouri-Kansas City, where his principal instructors were Dr. Gerald Kemner and Dr. James Mobberley; he received his Bachelor of Music degree in 1988 and his Master of Music degree in 1990.

Mr. Davis has composed pieces for a wide variety of ensembles, but his focus on wind band music has yielded several successful commissions, compositions and arrangements, including Deus ex Machina, A Western Plains Overture, Entebbe Variations, Native Hunters, and Bastion of Freedom. One of his more recent pieces is Boil That Dust Speck!, a concert scherzo for solo piano and band.

Keith has been a playing member of the Nebraska Wind Symphony since 1992 and also serves associate conductor and music librarian. He is also a playing member with Orchestra Omaha and the Omaha Symphonic Winds.