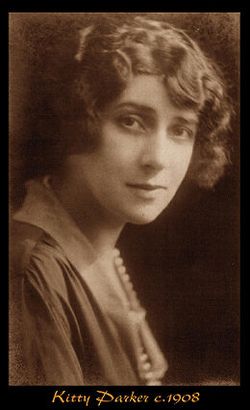 By her own account, Kitty (as she was known throughout her life) spent her early years in Tasmania until she went to Melbourne to study at the Conservatorium. In Melbourne, Kitty studied for her Diploma of Music from 1904-6, gaining honours in her Chief Study and Second Study in her first and third years. At the first Australian Exhibition of Women's Work, a grand undertaking held in November 1907 in the Exhibition Buildings, she won the Gold Medal for the 'Highest Award for Piano Solo over 20'. Soon afterwards, she headed to London with the intention of being introduced to and studying with Percy Aldridge Grainger. Grainger, for his part, thought highly of her pianistic abilities, as he was later to admire her creative talent.

Through Grainger, she met the English tenor Hubert Mortimer Eisdell, whom she married in 1910. Shortly after their marriage, Kitty was enjoying considerable success as an accompanist and began to find publishers for her songs and piano compositions. In 1913 five songs were published in London. During the 'teens she and Hubert formed a successful duo partnership, although Hubert claimed the greater kudos and made numerous gramophone recordings, included in which were some of Kitty's songs. Her work consists mainly of songs for voice and piano and solo piano works. At least one of the latter (Nocturne in F-sharp minor) was published under the name "Kitty Parker". It appears that most of Parker's composition occurred before and during her marriage.

In 1920, Kitty and Hubert traveled to Australia for a concert tour, after which the marriage dissolved. Parker's career from this point was primarily as a teacher and accompanist.