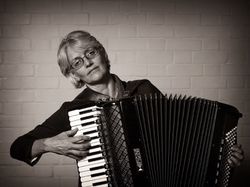 Ms. Street started to play the accordion at the age of seven and soon joined the local accordion band in Burton on Trent, Staffordshire. As a child she won many prizes on the accordion competition scene and was encouraged to play other instruments including the clarinet, piano and saxophone. She went on to study music at Bath University, and, although a first study clarinetist, she performed her final recital on the classical free bass accordion, becoming one of the first accordionists in the country to do so. She continued her accordion studies with Mario Conway at the Welsh College of Music and Drama and became the British virtuoso champion in 1981/2 competing in the Coupe Mondiale (World Championship) in Hamburg and Folkstone.

A move to London followed where she studied with the late Ivor Beynon, a pioneer of the classical accordion. During this time she entered the Royal Overseas League music competition, but with no category for the accordion they created a special prize to recognize her success. In 2004 she was invited to play at the prestigious Chartres International Accordion Festival alongside accordionists from all over the world.

Although Ms. Street has a background in classical music, she branched out into jazz and other genres early in her career. Her passion has always been to challenge people’s preconceptions of the much-maligned accordion.

An invitation from Mike Westbrook to join his band on saxophone and accordion performing ‘Big Band Rossini’ developed Karen’s interest in jazz. Her interest was such that she returned to education completing a post-graduate jazz course at the Guildhall School of Music and Drama. In July 2019 she appeared with the Ronnie Scott Jazz Orchestra performing the music of Maria Schneider.

Karen was a member of the Strictly Come Dancing Live Tour band for three seasons and she is also called upon for many radio and film sessions.