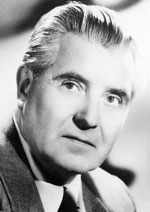 Karel B. Jirak (born in Prague, Czech Republic, 28 January 1891; died in Chicago, IL, 30 January 1972), was a Czech composer. He studied with Vitezslav Novak and Joseph B. Foerster at Charles University and the Academy of Music in Prague. Following his studies, he was appointed conductor of the Hamburg Opera in 1915 and from 1918-19, was the conductor of the National Theater in Brno. From 1920-1930, he became professor of composition at Prague Conservatory after which time, he became music director of the Czechoslovak Radio from 1930-1945.

In 1947, he was invited to Chicago to deliver some lectures at Roosevelt University, but after the communist take-over in 1948, he decided to stay in the USA. From 1948 until 1967, he was Chairman of the Theory Department at Roosevelt University. And following that, from 1967 to 1971, he served as Professor of Composition at Chicago Conservatory College.

Karel Jirak composed over 90 works among which are 1 opera, 6 symphonies, 7 string quartets, Symphonic Variation (1941), Piano Concerto, Concerto for Violin and Chamber Orcehstra (1957), Violin Sonata, Viola Sonata, Flute Sonata, Wind Quintet (1928), Clarinet Sonata (1947), and Requiem for solo quartet, chorus, organ and orchestra (1952). He is the author of a textbook on musical form (1924) and between 1945-46 while still in Prague, wrote monographs on W. A. Mozart, Zdenek Fibich and Jan Herman, the Czech piano virtuoso. Later on, while in the USA, he wrote a small study about Antonin Dvorak for a SVU presentation.