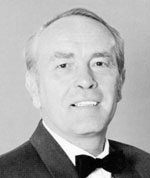 Karel Belohoubek (born 29 December 1942 in Zarosice, Moravia, in the Czech Republic) is a Czech composer Early in his life he decided to devote himself to military music. He studied bassoon and clarinet at the Military College of Music in Roudnice nad Labem and was then active in the Garrison Band in Stribro. From 1961, he was the solo bassoonist with the Prague Garrison Band and later with the Czechoslovak Central Army Band. At the Prague Conservatory, he continued bassoon study with Professor Pivonka and conducting with Professor Cizek. His wrote his thesis on The Slavonic Dances of Antonin Dvorak and their Instrumentation for a Wind Orchestra. In 1978, Karel Belohoubek became a conductor of the Central Army Band of the Czech Republic and in 1987 its Chief Conductor.

Ever since his student years, he has been interested in instrumentation and has devoted himself intensively to improving his skill in making arrangements and composing. Of the well-known concert music he has orchestrated are the Overture to the Bartered Bride by Bedrich Smetana, Ravel's Bolero, and the Symphonic Dances from Bernstein's West Side Story. His works are frequently performed at brass band concerts in the Czech Republic as well as in other countries. As conductor, he has made many concert band recordings for the radio and recording companies. His compositions appear on programs of many world-famous wind ensembles.

While principal conductor of the Czech Central Army Band from 1987 until 1999, Belohoubek increased its repertoire substantially and took part in its many successful tours to foreign countries. With this magnificent symphonic wind band, he performed annually at the internationally renowned Prague Spring Music Festival held in May. Under his guidance, ever new and different composers and harmonizations have gained acceptance into the repertoire for concert winds. Since 2000, he continues to be a freelance composer and director enjoying the opportunity of guest conducting in many countries.