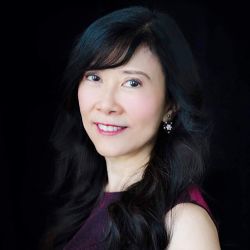 Kami is Japanese for gods or spirits of nature.

In Japanese mythology, the world was created by two divine beings: Izanagi (male) and Izanami (female). Their descendants become other gods or spirits. Various characters or tales in this Japanese folklore have inspired me to create a composition that evokes images of “popular” mischievous sacred spirits, namely: Hiruko (watery child), Amaterasu (incarnation of the sun), Tsukiyomi (incarnation of the moon), Yamata-no-orochi (eight-forked serpent), and the famous Momotarou-san (the peach boy). The nature of this work is “folk based”, bright and energetic, evolving around forceful conversations between the marimba solo and the drum ensemble. Besides displaying the instrumentalists’ great virtuosity and musicality, musicians are challenged to vocalize as part of the ritualistic and theatrical aspect of the piece.

This piece is written for Canadian marimba virtuoso Beverley Johnston.